When Sam and I met for her second coaching session, Sam wanted to focus on her feeling of ‘otherness’. This feeling came out very strongly in Sam’s first session when Sam was exploring where she saw herself in the organisation.

Using the word ‘otherness’ as the basis of an art based exercise, I started by asking Sam to focus on the present moment through a ‘mindfulness pause’. This helps to still the mind and allow that part of our brain that can be hidden from us to come to the fore. I then asked Sam to allow an image of her ‘otherness’ to emerge and when she was ready to open her eyes and capture it any way she wanted using the materials in the room.

When creating her image Sam talked about drawing a slinky toy. However, as we talked, Sam realised the image was in fact a curl, a powerful image of difference for Sam. Sam’s image is shown below. Exploring this new found meaning in her image… 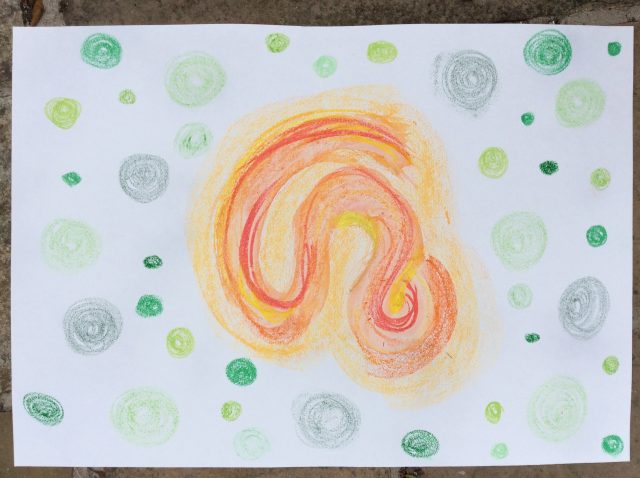 …Sam talked about the feelings of difference as a child which created a transformational shift for her – moving the feelings of difference in the organisation to one of an asset rather than a burden. Sam was able to talk about her ‘otherness’ as something that ‘…provides an opportunity to see and do differently, so it can be a strength if I can tolerate being uncomfortable at times.’ But it was the transformational shift that the image brought about that enabled Sam to let go of the negativity she was holding around her ‘otherness’ and really accept the value of what she was bringing to the organisation. ‘…I had a sudden realisation that my self-imposed unacceptable otherness stems entirely from my very early childhood experiences…which are long behind me. I am sometimes still sad for the hurt little-girl-me, but I recognise that I can safely let all of that go now!’

It was this breakthrough that enabled Sam to have the confidence at a much deeper level to manage the tensions in the organisation, whilst also nurturing herself and being open to future career plans that perhaps give greater outlet to who she is and her strengths.

I would like to say thank you to my client who has given me permission to share her case study. All names and some of the context has been changed to ensure my client’s confidentiality and privacy.