‘One of the most well-known differences between the hemispheres is that of speech and it is perhaps one of the most obvious reasons why coaching with art works so effectively.

As mentioned earlier the hemispheres can actively interfere with each other and the left hemisphere can suppress right hemisphere data if it doesn’t fit with what it knows, doesn’t fit with its logical and linear approach to its decision making, or doesn’t help create a consistent and comfortable world for us. This can pose a problem for the silent right hemisphere and for us.  You may have experienced this issue both for yourself and with your clients. Have you ever tried to remember something, such as a word, a name or a pin-code, and it only comes to you when you are doing something completely different? When you have stopped ‘thinking’ about it. By doing something different it would seem that you are distracting the left hemisphere from the task and allowing the right hemisphere to come in and solve it for you. It is a mini aha! moment.

We may experience this with clients who are going around in circles and can’t seem to make those shifts in their thinking and perceptions, which would help them forward. Perhaps you may have

experienced clients who just can’t ‘see the wood for the trees’. Others may have an inkling, a feeling about something but can’t articulate what that something is. Other phrases you may have heard are ‘I just know but I can’t explain it’, ‘I know there is something but I just don’t know what’, ‘I can tell you what it isn’t’. These situations may be accompanied by heightened emotions such as frustration, exasperation, sadness and defeatism.

All of these scenarios suggest there is something going on that isn’t being able to be communicated. That the right hemisphere, through all of the functions I have mentioned above, may have some useful information to share, but the left hemisphere doesn’t have the words for it, may be suppressing it or ignoring it – and can’t or won’t vocalise it!

This isn’t helped by the fact that the left vocal brain is dominant most of the time.

So when we want to explore at a deeper level of awareness and access that which is hard to express or perhaps even not known, we need to work in a way that enables the left hemisphere to relinquish the task and allow the right hemisphere to do it, and if needed, to give voice to the information that it leads to.’

Coaching with art can be very effective in quieting the left hemisphere and allowing the right hemisphere to take over the task. The image making process externalises and makes visible the right hemisphere’s experiences and perceptions. The art clients create give their right hemisphere a voice through, not only the image, but also the language of the image making process. This enables them to access the non-verbal, unconscious parts of their internal world, externalising the complex, paradoxical and the hidden. They are able to hold the whole of it just as it is, in all its complexity.

Coaching with art gives coachees a safe space to explore their emotional complexity and, by so doing, it gives them the space to start connecting to, reflecting on and understanding what is going on for them.  If we do it right, they talk spontaneously, using the right hemisphere vocabulary and if they don’t know what it means, this is okay as meaning will come later when it is ready to be known. 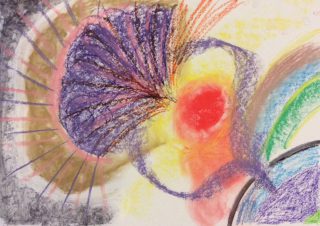 5 comments on “Giving our silent right hemisphere a voice”